The Thaumaturge 365 creative team has created original animations for the mega-screen on the side of the Prudential Center. The lead students of the team participated in City Without Walls Newark New Media artist residency and apprenticeship program. Working with their mentor, Andrew Teheran, they produced thirty-second animations that are currently in rotation on the screen through the end of July.
Posted by Admin at 10:17 AM No comments: 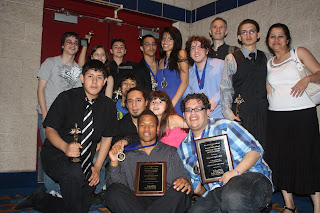 Students of East Side High School led by kids from the Thaumaturge 365 animation and FX team won in seven film categories at the 7th Annual Newark Public Schools Film Festival which was held at the Newark Screens on Springfield avenue on Wednesday night. The team won the Animation Award for their music video, Chickens In Love and won in the Commercial Category with their Flight Of The Arrowhead trailer. The chief animator of The Flight of the Arrowhead, Leonardo Guilli, won best animator along with Joao Tarouco, Andre Zatta and Carina Alves. Actress and founding member of Thumagturge 365 Stephanie Lee Garcia won the Graphics Award for her original illustrations for Chickens In Love. In The Flight of the Arrowhead Stephanie plays two characters. She reprises her role as the mercurial fairy Lee-Lou and adds to her repertoire the austere enchantress Lady Ursula Seraphane. "It is extremely challenging to play two roles that are so distinct, especially when they are in a scene together and have to interact."
Dorian Sabae and Felipe Dos Santos, the composers and performers of the original soundtrack of The Flight of The Arrowhead won the Best Music award for their work on the trailer for The Flight of The Arrowhead.
It was a great night where all of the student filmmakers in the City of Newark screened their work. The night was made possible by the School-to-Careers and College Initiatives office of the Newark Public Schools.
Posted by Admin at 2:31 PM No comments: 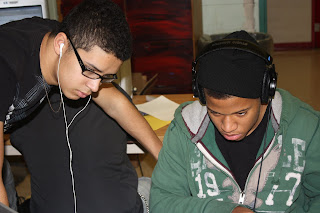